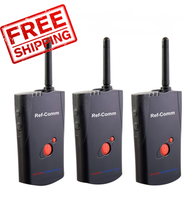 Why is Ref-Comm better than the half-duplex "walkie-talkie"?

Ref-Comm is superior in a number of ways:

3. Conference mode - not restricted to one talker at a time

4. Private and secure - no eavesdropping

Why does Ref-Comm perform so well among full-duplex radios while being so competitively price?

Most full-duplex radios are digitized. Their analog signals are converted into digital signals and transmitted in the air. So is Ref-Comm. Ref-Comm has developed such a smart technology that it can compress digital signal greatly to save digital data processing. Most full-duplex radios cannot compress data so efficiently hence the data is not processed quickly enough. Their insufficient processing capability degrades one or more of three most important features: range, sound quality, and group size. Ref-Comm excels in all three features while is still able to boost group size to 8 in most regions

What factors would have an impact on the range of communication?

Buildings, walls, metal, and conductive material has certain effect on RF (radio frequency) transmission. So is human body which is mainly water. We can maximize range by facing the Ref-Comm unit to the direction of the other party. Wearing the unit on the arm with the Arm Band reduces the effect of the body blockage significantly. Signals from cellphone tower also affects the range. That’s why our range is 300 meters inside city while it can reach as far as 900 meters outside city where cellphone tower signals are weak.

Will adjacent Ref-Comm groups interfere or pair with each other?

No. After proper Binding Procedure (Refer to webpage “Binding Procedure” for details), a unique group ID is generated for each group. Each unit only talks to the units within its group. Every unit identifies other unit by its serial number. Every Ref-Comm unit bears one unique serial number.

How many Ref-Comm groups can be contained within one field?

No-master means the whole group is not affected if any unit wonders out of range or is turned off. Ref-Comm mesh network requires neither base station nor master unit, which makes operation flexible and connection robust. Mesh network can be considered as peer-to-peer. As long as any 2 units of the same group are within range, they are able to communicate. It won’t affect system if any unit wanders out of range. And the connection is automatically resumed if the unit comes back.

Can filter filter out the noises?

No. It is common misunderstanding that filter can filter out the noise. Actually filter cannot tell the “good” sound from the “bad” sound, or noise. However filter can set the threshold of the sound level to be received, that is, dynamic range. On Ref-Comm user can adjust microphone sensitivity to set the sound level to be received by other group users. Ref-Comm has enough bandwidth to allow wide dynamic range sound.

How to use Ref-Comm for referees in noisy stadium?

For soccer game officiating in a noisy stadium, the referee sets his sensitivity to level 4 (there is total 5 levels of sensitivity in Ref-Comm) so both ARs (assistant referee) can hear the referee clearly. ARs set their sensitivity level to 2 and mute their units as much as possible or use PTT (push-to-talk) headsets.

Is there any way to increase Ref-Comm group size and range?

Yes. By using audio connector. We can use audio connector to connect multiple units, one unit from each regular group to form large group. 2-8 regular groups can be connected depending on your area. Meanwhile the regular group size is reduced by 1 by this connection. For example, in North America, we can have (8 – 1) x 6 = 42 users.

We can also connect one cellphone with one unit from one group via audio connector. The same can be done for another group. When those 2 cellphones communicate, the 2 remote groups are connected. This way much longer range is realized.